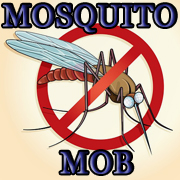 Mosquito control controls the population of mosquitoes to reduce their damage to human health, economies, and tourism. Mosquito control is a vital public health practice throughout the world,  especially in warmer climates because mosquitoes spread many diseases and can damage economies.

Adulticiding is the type of mosquito control that Mosquito Mob of Wilmington, Delaware provides.

There are several mosquito-borne diseases that currently pose concern in Delaware: Chikungunya, West Nile Virus, Eastern Equine Encephalitis, and Canine Heartworm Disease, and a possible newcomer, Zika, for which the state's awareness is growing.

Zika virus is a pathogen transmitted by mosquitoes that is now largely threatening Central and South America, the Caribbean islands, and the southeastern U.S. Symptoms include fever, rash, joint pain, headaches, muscle aches and/or conjunctivitis. Rarely fatal, the illness is usually mild with symptoms lasting several days to a week. What distinguishes the Zika virus from other mosquito-borne illnesses is the effect it seems to have on pregnancy. Zika can spread from a pregnant mother to her baby, and that infection may be linked to birth defects such as microcephaly.

The mosquito species capable of transmitting this disease are the Yellow Fever Mosquito (Aedes aegypti) and the Asian Tiger Mosquito (Aedes albopictus). Both species lay their eggs largely in man-made containers, such as tires, buckets, corrugated rain spouts, etc. Traditional mosquito control methods of truck-mounted and aerial sprays are limited in controlling these mosquitoes, since they are often active during daylight hours. Reducing mosquito populations around the home via removal of containers that hold water and thus become prime mosquito habitat is one of the key prevention strategies for preventing mosquito bites and the possible transmission of Zika virus.

Chikungunya virus (CHIKV) is a pathogen transmitted by mosquitoes that is now threatening the United States.  Although rarely fatal, the symptoms include debilitating joint pain and can persist for several weeks. In 2014, Florida, Puerto Rico, and the U.S. Virgin Islands recorded their first locally-acquired cases. In 2014, only travel-related cases of CHIKV were reported in Delaware. As of Nov. 17, no local or travel-related cases of CHIKV have been reported in Delaware for 2015.

The mosquito species that transmit this disease are the Yellow Fever Mosquito (Aedes aegypti) and the Asian Tiger Mosquito (Aedes albopictus). Both mosquito species lay their eggs in man-made containers, such as tires and buckets. Traditional mosquito control methods of truck-mounted and aerial sprays are somewhat ineffective in controlling these mosquitoes.  More recent mosquito control methods are using back pack sprayers in residential areas.  Removal of containers that hold water and yard sanitation are key strategies for preventing Chikungunya.

West Nile virus (WNV) is a virus transmitted by mosquitoes. While there is a vaccine available for horses, there is no human vaccine for WNV. The best way to reduce your risk of WNV is to protect yourself from mosquito bites.

2015 WNV Activity in Delaware: There were five human cases of WNV reported in Delaware in 2015. Eight dead wild birds and 27 sentinel chickens (from 11 different locations throughout the state) were positive for WNV.  Protect yourself from mosquito bites and mosquito-borne disease by avoiding mosquito activity when possible, dressing in long sleeves and long pants, and properly applying mosquito repellent.

Eastern Equine Encephalitis (EEE) is transmitted to horses and humans by mosquitoes. Like West Nile virus, there is a EEE vaccine available for horses, but not for humans. Fortunately, human cases of EEE in Delaware are rare. The last recorded human case of EEE in Delaware occurred in 1979.

Canine heartworm, a disease fatal to dogs, is circulated within the dog population by mosquitoes.  Dog owners are encouraged to protect their pets from mosquitoes and heartworm by administering preventative medications year-round.

Here are some interesting facts about mosquitoes:

-  Birds and fish are known to eat both mosquito larvae and adult mosquitoes.  Both are considered to be a 'natural form' of mosquito control.

- Dragonfly larvae, known as "nymphs",  feed on mosquito larvae and adult dragonflies feed on adult mosquitoes.  Some cities in the U.S. release dragonflies in the summer as a natural form of mosquito control.

-  Bug zappers are not a very effective form of mosquito control.   Some studies have shown that less than one percent of insects caught by bug zappers were mosquitoes.

-  The CDC names only 4 chemicals as being effective at repelling mosquitoes: DEET, Picaridin, Oil of Lemon Eucalyptus  and IR3535.